I apologize for being one day late. I had my days mixed up this weekend. To compensate, I will extend the deadline for Cerberus by one more day. Entries will be accepted until August 4th.

Over the last 8 days, I received 30 entries to Medusa’s Snake Pit. The answer keys were a tad messy but that didn’t stop 27 solvers from getting to the correct solution.
Here is the list of correct entries in order that I received them:

Oh no! Three entries were incorrect.*
I cannot accept their entries since Medusa had already turned Michael, Eric and Zoltan to stone. Sorry! But do try again with Cerberus.

As for the 27 correct solvers, they will participate in a rock paper scissors tournament right after Cerberus leaves. Speaking of the devil, here he comes! Check out his puzzle at the menu above. The three-headed beast will linger around for the next 8 days.

Thank you for being with me throughout this year’s July Giants.
Enjoy the last puzzle!

Argus Panoptes has been defeated!
In just over a week, 31 solvers defeated Argus Panoptes. Here is the list of solvers in order of their submission times:

The giant Masyu seemed to be really easy in comparison to Hydra’s Tapa two weeks ago. Fret not!
You will spend the next 8 days surviving in Medusa’s Snake Pit!
Can you slither your way to victory? Get the puzzle at the menu above.
There are a lot of rules to swallow in this one, so if you’re unsure about the instructions, feel free to leave a comment and I’ll get back to you as soon as possible.

The 2014 BRANDS Thailand Sudoku Open concluded today. The usual 2-day format was increased by one day since in Thailand; it’s a 4-day weekend. The tournament started on Friday and the venue shifted from Siam Paragon to Central Ladprao, both are department stores in Bangkok.

Three to a table in the middle of a department store? Come on.
[Photo: Thailand Crossword Association]

From what I see, the conditions were awful. The instruction booklet was very sloppy and an unhealthy fraction of the puzzles were clearly computer-generated. Really the only thing this event is still attracting both local stars and international participants is the money. The winner gets to pocket a nice $5000 US.

This year saw an all-time low of international names. Just Jan and Kota returned. Yuhei was busy and the entire Indian team had to cancel their visit because the dates clashed with their hastily-organized Times Championship. Last year’s finalists Farhan Hassin (Malaysia) and Tung Yi Wu (Taiwan) were also absent. My friend, Gabriel Gan (Singapore) usually turns up as with a handful of Chinese players but none came this year. The only country to consistently field in a team every year is the Philippines. But ever since variants start to make more appearance than classic sudokus, none of them managed to leave any impressive results for the last 6 years. 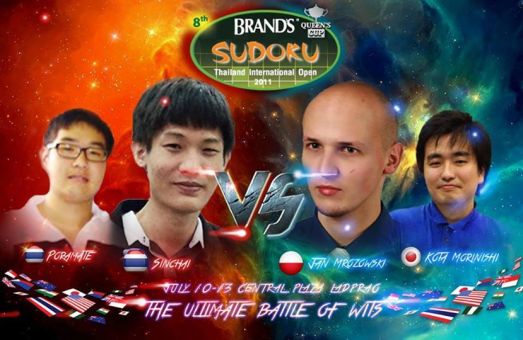 Two funny things: 1. The logo has been re-used for the last 4 years (note “2011”) and 2. Poramet didn’t even sign up.
[Photo: Thailand Crossword Association]

Let alone solvers from overseas, Thailand fielded an even less impressive roster. Only two members of our national team turned up. Sinchai Rungsangrattanakul, who recently entered to world’s top 10, was our nation’s favourite. College had me and Poramet occupied for the weekend so only rising star Supachai Thongsawang join Sinchai as our front-runners.

Given the many absences, the final five was somewhat predictable. Sinchai collected the most points in the preliminaries so he earned the stage’s centre. Sandwiching him was Jan and Takuya Sugimoto, a newcomer to the event. Kota was placed 4th and I understood there was a tight race for the last spot which was narrowly won by Supachai.

Close race for a spot in the finals.
[Photo: Thananon Boonkrong]

The finals must have been a nail-biter as Kota became the first person in this event’s 8-year history to successfully defend his title. Jan finished second again and the revelation of the tournament goes to 18-year old Supachai who squeezed out a third place win. 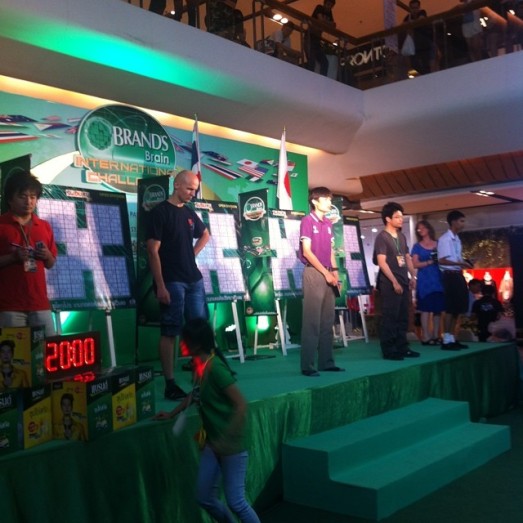 Here is the puzzle that was used in the finals. Print out a large copy and try solving it standing up on a wonky board to get the real simulation of the finals.

I would love to welcome international solvers to this event, but I still think there are too many things this tournament can improve on. Our national association is not very energetic at addressing them so do come along but don’t expect the best hospitality cause you’ll probably be disappointed. Lastly, can I ask again who wrote the few handmade puzzles for this event? A lot of people want to know who our national association has ties with and why they are making it so secretive.

Entries for Hydra have now been closed. When you submit an answer I will normally take no more than 3 days to reply. I have replied to every submission I’ve received so if you think you’ve entered and haven’t heard from me yet, contact me immediately.

As for Hydra, 23 warriors took a shot in the last 8 days. I asked for the number of black squares in the central Tapa, the correct answer to Hydra was 35.
Here is the list of solvers in the order of submission:

*Alas! Hydra claimed two victims!
Jack and Nick (both submitted 34 and were one cell off from the right answer) will have to be excluded from the tournament bracket. Sorry! Try again!

As for the remaining 21, I won’t reveal the results just yet. You’ll have to be patient. Why not increase your odds of winning by slaying a few more giants?

Argus Panoptes is now the current giant on this blog, he is a lot tamer than Hydra. Click on his name at the menu above to see what you’re up against this week. You have until the 18th July to solve the puzzle before Medusa arrives. 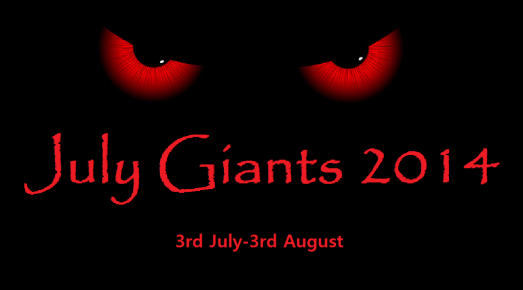 Throughout July Giants 2014, one monster of a puzzle will be released every 8 days. There will be 4 puzzles in total. You have 8 days to solve each puzzle before the monster departs and the next monster appears.

One winner is selected from each monster and they will face each other at the end to determine one winner.

The puzzles and further details and be found in the menu above.
Without further ado, here comes Hydra, a nine-headed Mastermind Tapa puzzle! 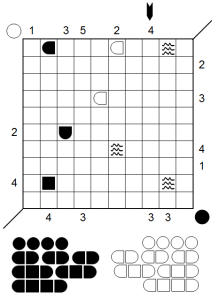 I first saw this type at the 2013 WPC in Thomas Snyder’s round. The puzzle above was easily the hardest out of all the puzzles in Anchors Aweigh, to which solver James McGowan rightly agrees: trying to keep track of what’s happening in each cell. I did it in MSPaint, so had 6 colours in action.

The reason this last part of the solutions took so long was that I intended to write up a full solving guideline. As much as I wanted to do so, my study timetable disagreed, so we will have to just make do for now. My starting point was at the 4th column with 5 and 3 adding up to 8 (leaving two cells blank). I remembered vaguely how the puzzle solves from left to right but since a couple of months has elapsed, I have very little memory about it. 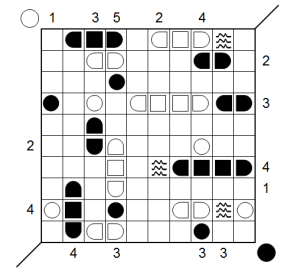 Despite the label, I don’t think this puzzle was that difficult at all. You have to try out horizontal/vertical orientations of the long ships to get through the first part of the puzzle.
Then you should have a few ships left at the end to satisfy the two 3s in the 9th and 10th row.

And that’s all the puzzles covered in Anchors Aweigh. Thomas, Antonis and Walker had all received their prizes.
Want to be the next winner?
Well, I’ve already cooked up more puzzles for future events and it looks promising from here.
Come back in a few days for…

What do crosswords in your newspaper, that numbered 9x9 grid that’s suddenly everywhere, the spot the differences on a cereal box, a chess position from some tournament match, the squiggles you see in common IQ tests and a high school mathematics exam have in common?

Answer: They can all be classified as a “puzzle”.
As a lifelong puzzler, I always find the word “puzzle” to be a bit broad. Everyone has their own definition of a puzzle. I imagine a certain place where all puzzle types gather and made known to everyone. That place would be Somewhere Over the Rainbow.